Two snakes interlacing one another weave their bodies through the centre of a halo-like circular form. Stretching out to opposite ends, they unfold their elongated frames as if shielding the tops of what seems to be a figure of an abnormal creature that displays human characteristics. Like a synchronised dance, the snakes glide through the surface, swivelling and twisting, eventually curving into the hands of their ‘master’, the creature and finding rest. From recognisable animals such as the snake to shapes and images of fictitious creatures, artist Keith Khan combines a mixture of geometric and biomorphic forms to assemble a contemporary apotropaic figure. Placed in a room full of weapons of violence, arms and armours of the 17th to 19th Century, Keith’s Teratological Drawing presents the artist’s contemporary take on the issues of cultural identity through the subject of the legendary and mythical creatures.

All cultures around the world have been inspired by the existence of animals, both real or imagined. Our creativities have transferred the real onto paper and objects for decorative purposes and through our imaginations, we have brought to life mythical creatures in their truest forms. These fabled creations were often fabricated to possess supernatural powers and imbued with symbolism to represent the virtues and vices of human nature. From hybrids that were part human, part animal, to creatures entirely from the imagination, the ever so realistic portrayal of these creatures by artists emphasised an authenticity, which at most times was nonexistent.

In the West, a book called the Bestiary, or Book of Beasts, existed for the teachings of natural history and religious understandings. Within the Asian cultures, stories were told of great many dragons and monsters generally as individual legends and folktales. The similarities would be the existence of moral lessons in which accompanied each mystical creature, establishing values and norms for religious and cultural purposes. In addition to ethical teachings, many deities existed within legends to protect and guard humans against evil. Possessing an object that contained imageries of such creatures was the way to assure the protection and the representation within weapons of war was no exception. 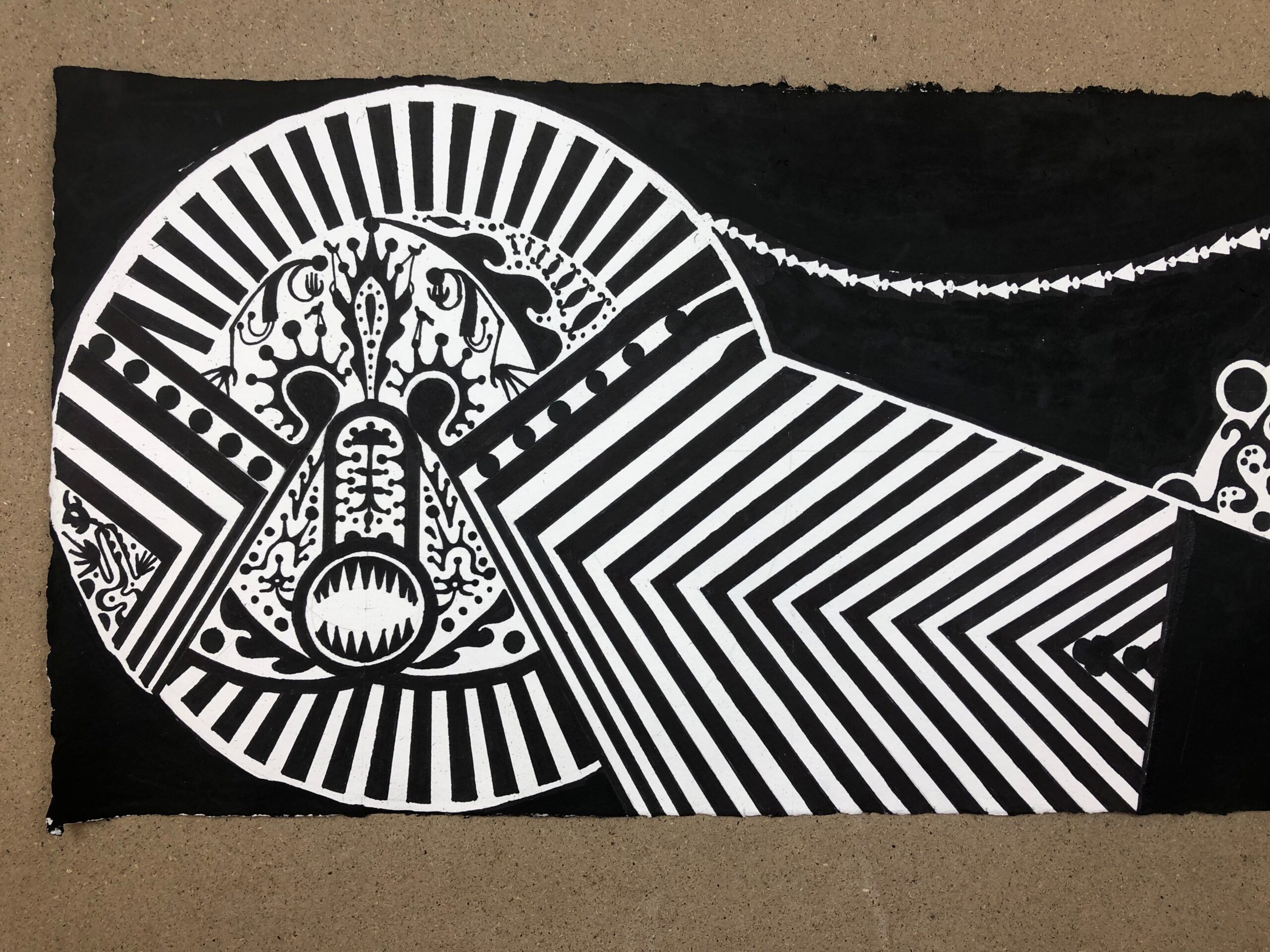 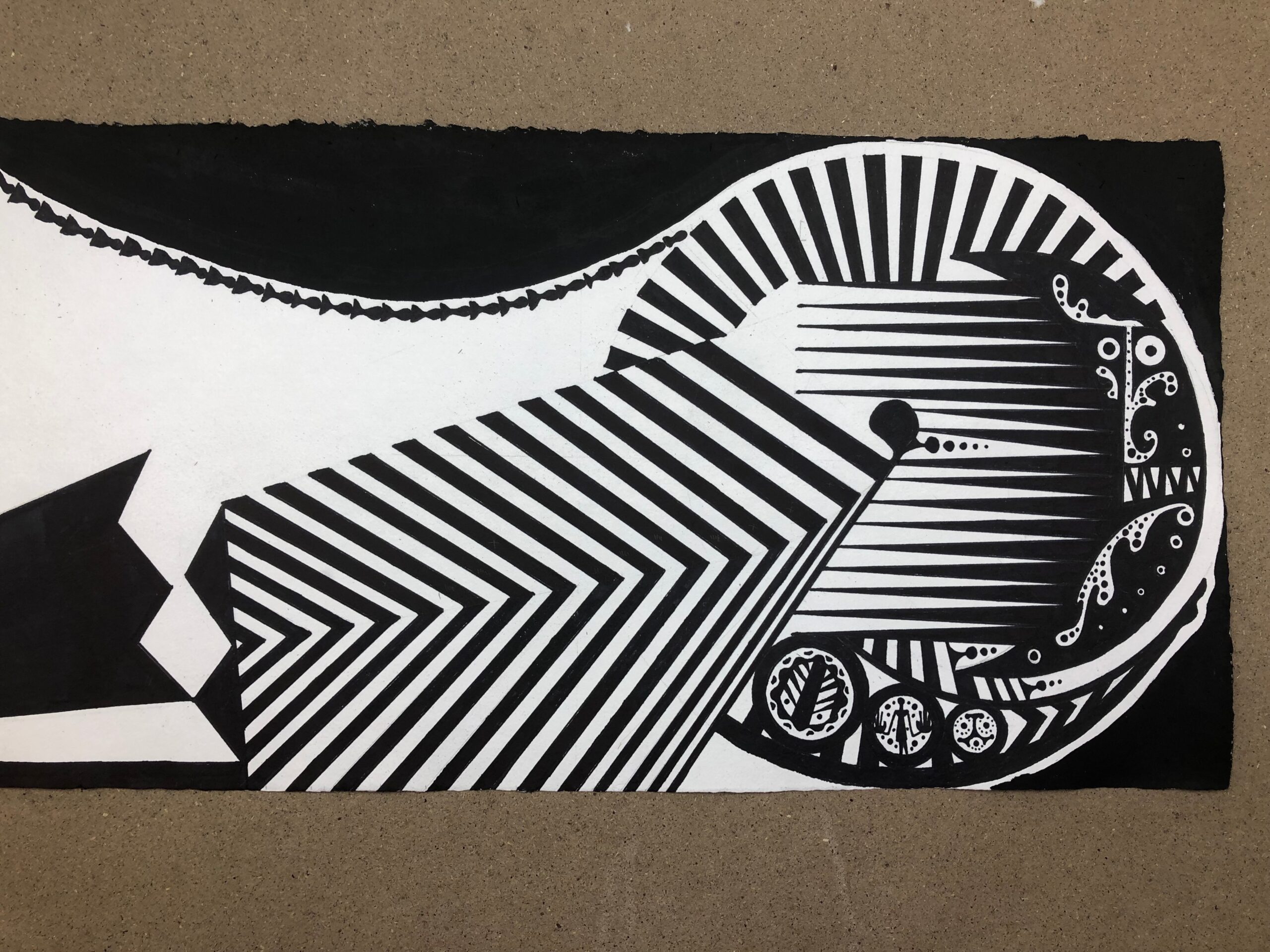 The highly stylised animal depictions within the arms and armours of Peter Finer Gallery’s collection highlights the importance of divine creatures within our transnational traditions. Embellished with jewels and gemstones and hand-crafted with precious metals, the intricate craftsmanship demonstrated through the fine sculpting of the animal-like figures almost disguises the sense of violence and rather forms a perception of a valiant and heroic figure. Yet, when the layer of material ornamentation is removed, the objects are prone to an entirely new interpretation.

Within Keith’s Teratological Drawing a set of hands are symmetrically positioned on either side of the large circular piece. Thin and elongated, the creature’s almost blade-like fingers hold up an object on either hand, gently pinching with the tips of the index and thumb as if displaying it out for the viewers to see. On one hand holds an 18th Century Fine Dagger, Khanjar, crafted in Jade with a horse’s head, and on the other hand is the 15th Century Rare Axe, Rdo Rje Dgra Sto, an object that features images of Makara, a mythical sea creature known to guard and protect humanity.

Constructed in layers of gold and precious stones, both antique pieces were in fact objects for the upper class or the royalty. These were either presented as a gift or specially commissioned as a tool of ornamentation to signify the wearer’s class and status. Through the form, we are able to recognise the identity of the object as a weapon of war. Though the transferral of these three-dimensional pieces onto a flat, black and white surface removes the decorative and material aspects, and the weight of the object is also withdrawn. The reduction in scale, when put against the creature’s hands, modifies our perception and ultimately our understanding of the object itself. Instead of a tool of violence and power, it is transfigured into an image of a miniature commodity. Pinched by the tips of two fingers, the gigantic creature holds up the lethal weapons as if it has prevailed over the violence standing amongst the arms of ancient culture guarding one against brutality.

Influenced by his Caribbean heritage, the structure of Teratological Drawing presents a similarity to that of traditional Indigenous folk art. Though, the assemblage of patterns and illustrations of various traditions builds up a figure which cannot be defined as the representation of a single cultural identity. What seems like a drawing of a giant monstrous creature that has leapt out of old mythology, is in truth purely a product of the artist’s imaginations and potentially a bestiary of our contemporary society.

Peter Finer is a family business that specialises in Antique Arms and Armour from cultures worldwide, which has been established for over 50 years.