Jacob joined The Fan Museum in 2010, having completed a Post Graduate degree in Fashion Curation at London College of Fashion. As the Museum’s curator, his responsibilities vary enormously from helping to plan and deliver exhibitions and events to designing the Museum’s publicity materials and researching the collections. In 2017 Jacob curated the Museum’s pioneering ‘Street Fans’ project. More recently he joined The Arts Society Directory of Lecturers and offers a variety of richly illustrated talks covering different aspects of the fan’s multi-layered history.

Traditional ‘war fan’ incorporating cast-iron lacquered guards decorated in gold with the triple hollyhock mon of the Tokagawa Clan. The thick paper mount is decorated on one side with a gold leaf disk on a red ground, the design inverted on the other. Traditionally, this type of fan was used by samurai as a signalling & cooling device, but more often formed part of ceremonial costume.

Contextual text
In Japan, handheld fans are instruments of ceremonial importance but also carry broader, social significance. The origin and development of the folding fan is not entirely clear, but it is widely thought to be a Japanese invention of the early-Heian period. The first folding fan (ogi) incorporated varying numbers of tapering wood blades pivoted at the lower end and strung with cord in the upper part. Often made from hinoki (hi) cypress wood, fans of this type are commonly referred to as hi-ogi and form part of the ceremonial attire associated with the Japanese Court.  The earliest surviving example, discovered in Nara City, is thought to date from the mid-eight century.

The pleated paper folding fan is similarly thought to have originated in Japan where several fanciful legends refer to its creation, the most appealing of which refers to a man named Toyomaru of the Tamba region who, inspired by the anatomical shape of a bat’s wing, conceived a fan which expanded in a similar fashion. Interestingly, a Japanese term often used to describe folding fans is kawahori or ‘bat fan’.

Following the forced reopening of Japan in 1858, which ended a prolonged period of self-imposed isolation, Western markets embraced Japanese craftsmanship and imported into Europe vast quantities of decorative wares – fans included. Amongst the most collectable formats were rigid hand screens (uchiwa) and folding fans incorporating brightly coloured woodblock prints (ukiyo-e) which imitated the art form’s most accomplished masters: Hiroshige (1797–1858), for example. Typical subjects included seasonal views of Mount Fuji – Hiroshige’s ‘Thirty-six Views of Mount Fuji was highly influential – and gatherings of Courtesans participating in leisurely activities such as calligraphy and tea ceremony. Such idealised views of Japanese culture greatly appealed to Western consumers who mainly perceived Japan and its people as exotic, mysterious and undeniably alluring.

With the passing of time, fans of all kinds became evermore embedded within Japanese culture. Woven into almost every facet of social activity, their expressive qualities are today brought to life by Noh and Kabuki performers and a dwindling number of Geisha.  Whereas fans are no longer widely used in the West, in the Far East they remain a practical and popular necessity carried by men and women alike. 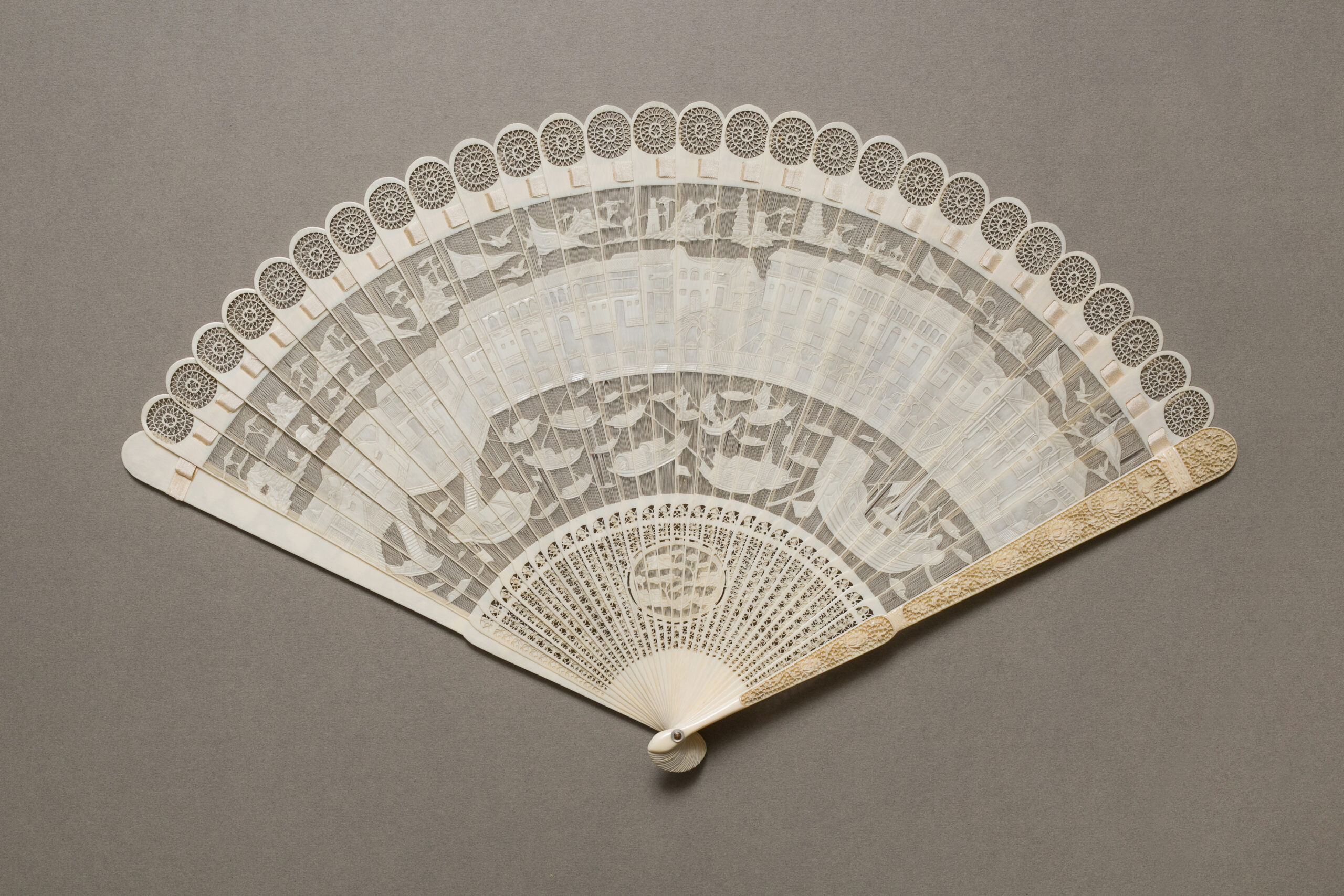 Ivory brisé fan, the blades delicately fretted and carved in the central part of the fan with a scenic view of the Pearl River and Canton factories.
China for export, late-18th century
The Fan Museum, Helene Alexander Collection, 680 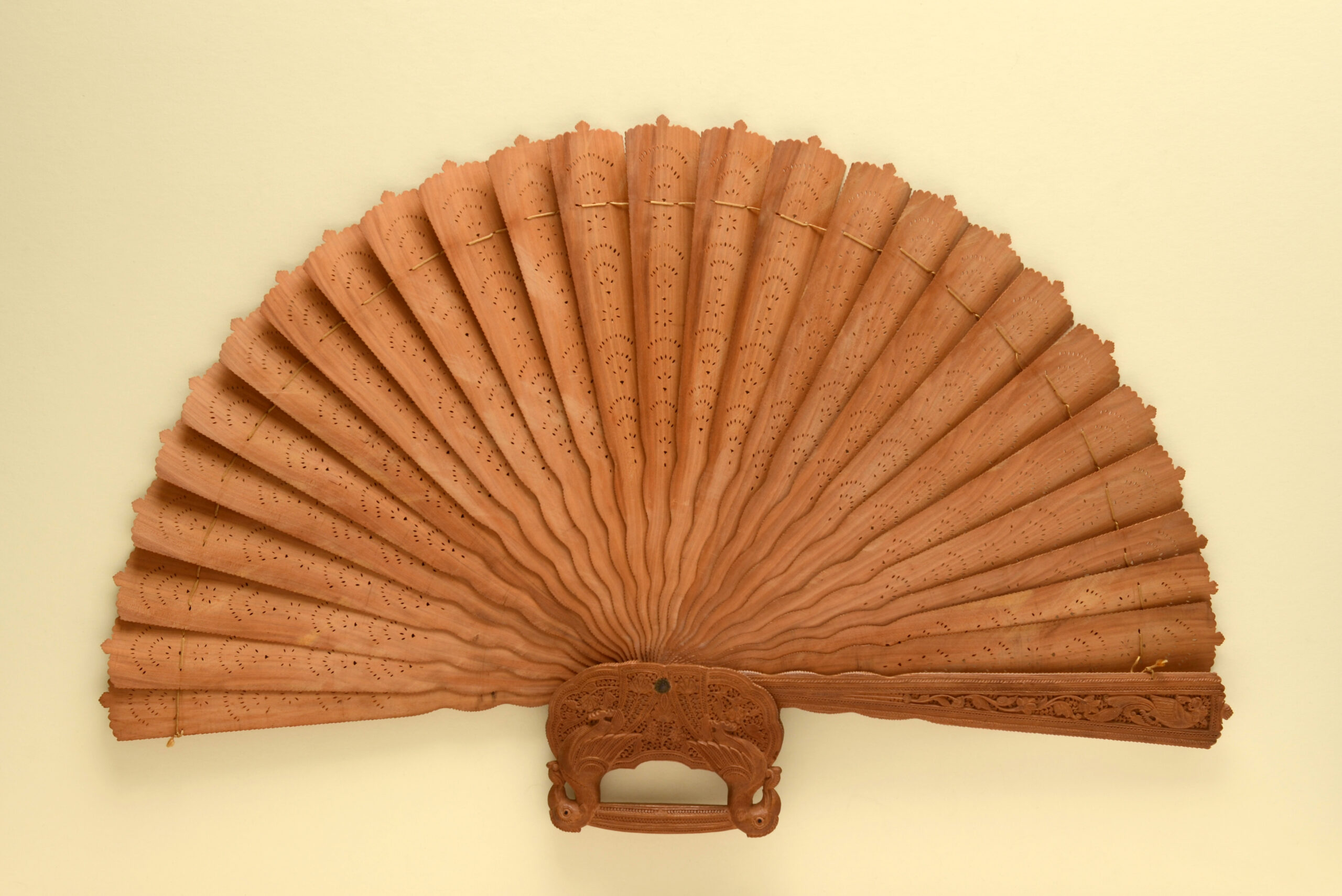 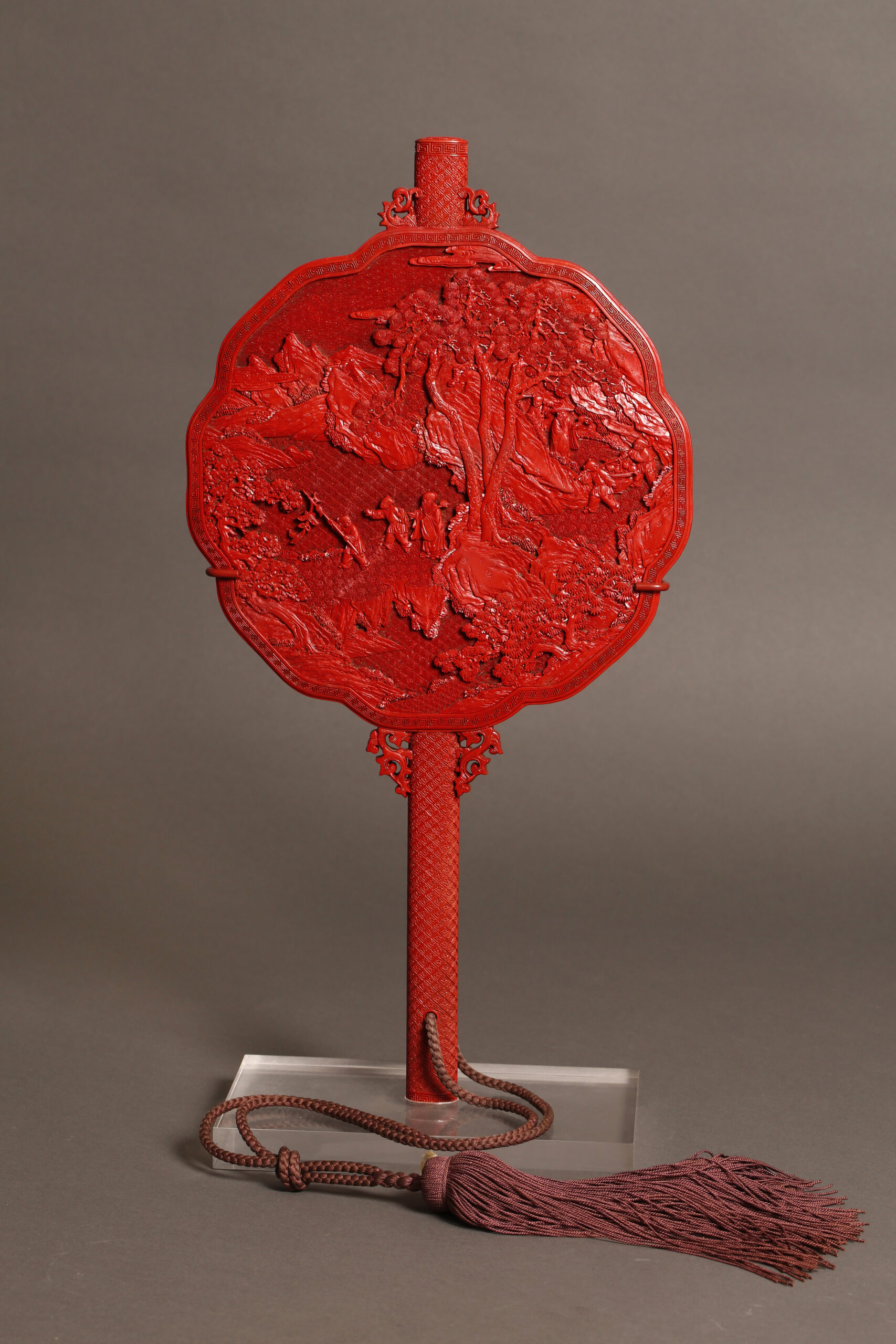 Ceremonial fixed fan (pien-mien) crafted from cinnabar lacquer, one side of the screen applied with carved flower stem and mother of pearl dog, the other richly carved with figures in a mountainous landscape.
China, second half of the 18th century
The Fan Museum, Helene Alexader Collection 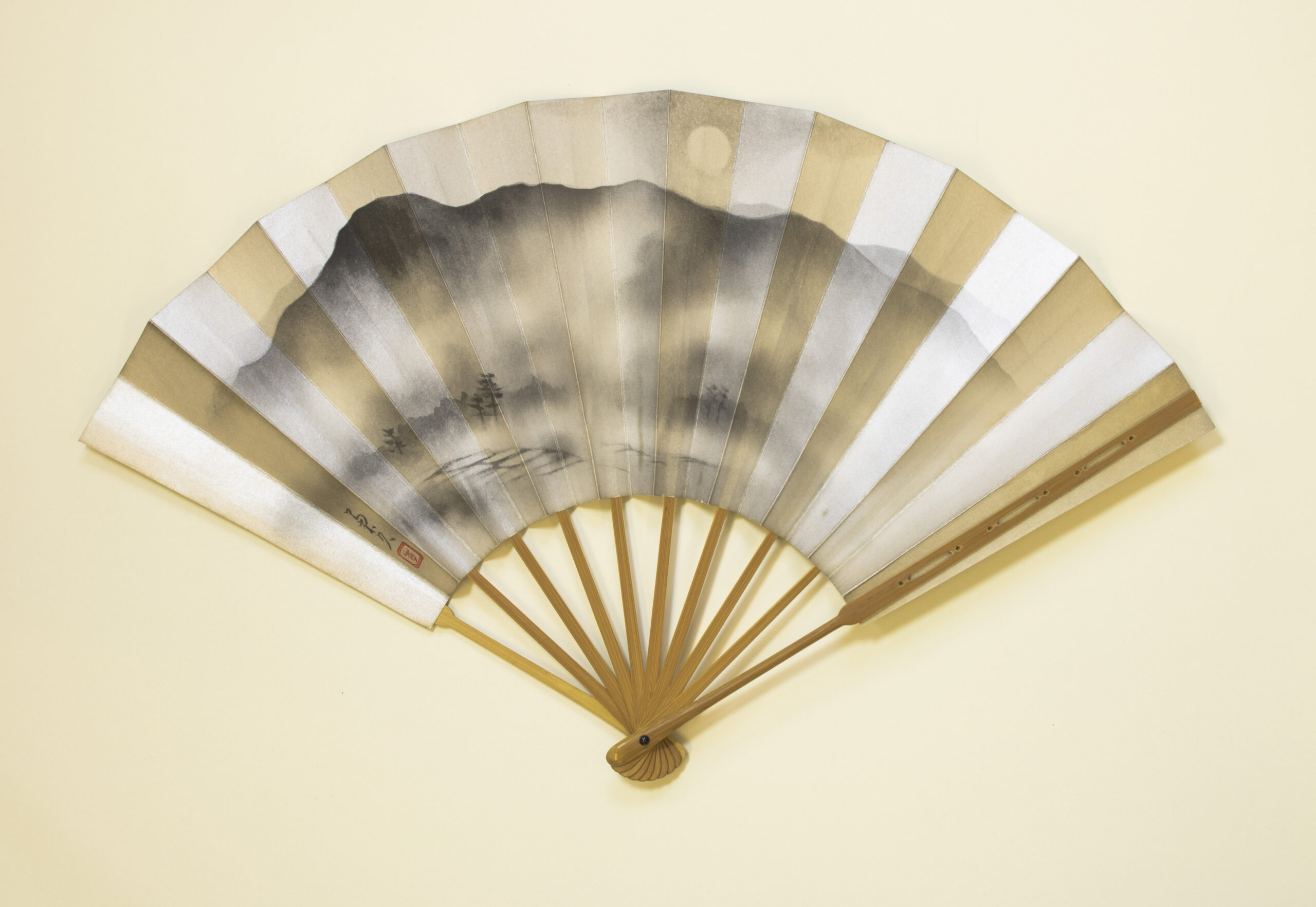 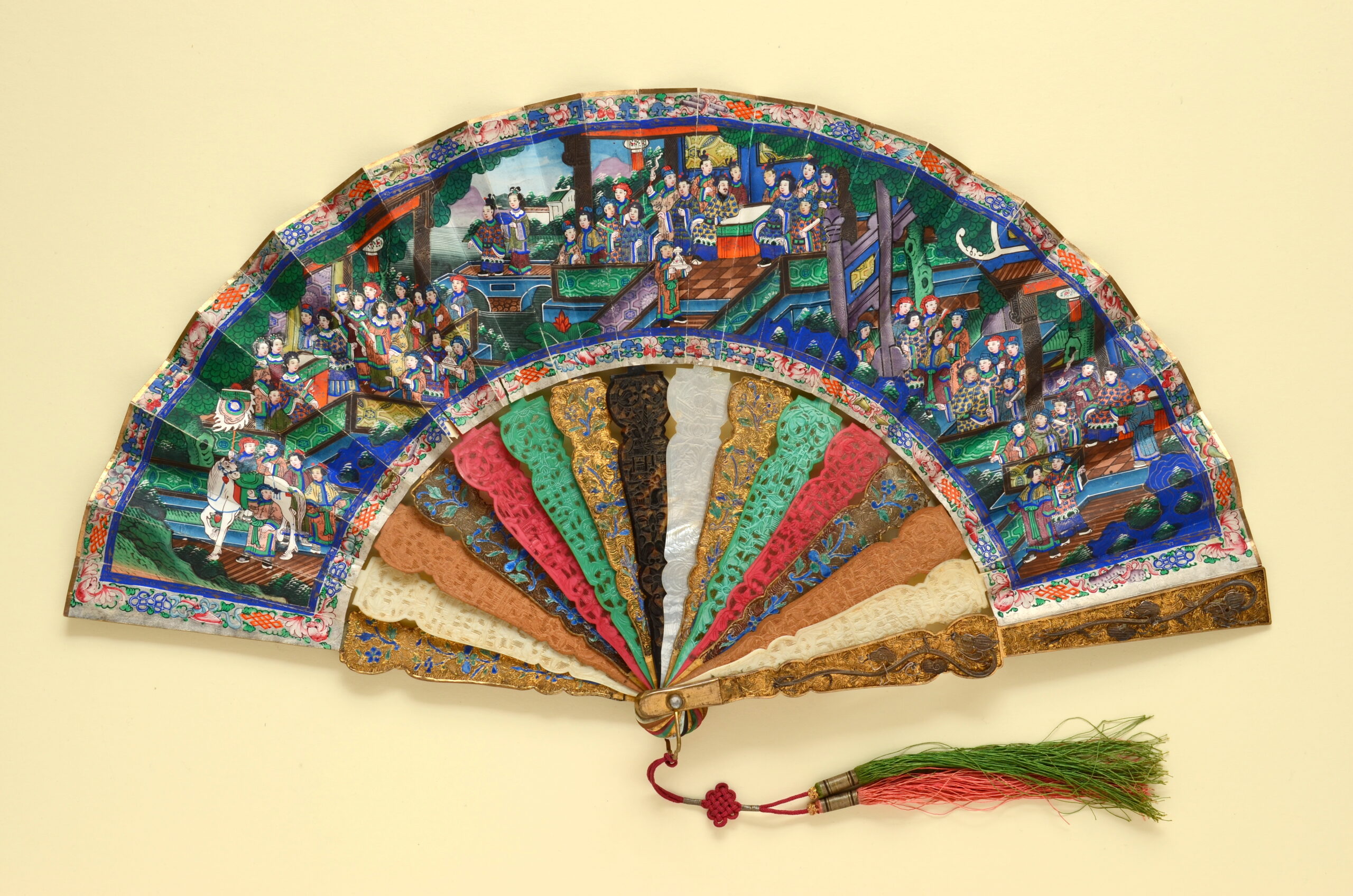 Folding fan, the sticks alternating ivory, sandalwood, cloisonné metal, ivory (stained red), bone (stained green), mother of pearl and tortoiseshell. The paper leaf is painted with a populous scene of Chinese officials & other figures wearing with robes of applied snippets of silk and faces of painted ivory. The fan is presented in a custom-made silk lined lacquered box. Fans of this type were exported to Europe from China in great quantities during the second half of the 19th century. The mixed media sticks may indicate the fan served the purpose of a tradesman’s sample, demonstrating the variety of options available to prospective buyers.
China for export, second half of 19th century
The Fan Museum Trust Collection, LDFAN1990.1