Grosvenor Gallery is delighted to announce its upcoming exhibition, ‘Super Natural’, New works by Faiza Butt. The exhibition will open at the gallery with a private view on Thursday, 7 October 2021 from 6-8pm. Faiza will be hosting a tour of the exhibition for Frieze West End Night on Thursday, 14th of October at 7pm.

‘Super Natural’ marks a seminal moment in Faiza’s career, as she returns to painting in oils after a long hiatus, since her days at the Slade school of Art in the 1990s. Faiza joined art education during the hay day of post-modernist debates, where ‘painting’ was declared dead. Her MA years at the Slade were spent discussing how unnecessary it was to represent life through painting, when there were cameras available to capture every moment. “We discussed the death of painting and its rationale every day, in the so called ‘painting department’.”

However, over the last few years, Faiza has reconsidered this dismissal. She says: “This show is an act of rebellion. I create works in the most conventional medium – oil paints. It took me years to find the courage to finally negotiate with myself that painting, no matter how representational its intentions, does not rival a camera…and in fact cannot be compared at all. It is a very flawed argument to deem the two as serving the same purpose”.

These works have been the culmination of the events of the last two years, which has given her time to pause and reflect on the work around her and her reasons for becoming an artist. Being both physically and mentally ‘locked in’ has made her respond by creating a ‘Super Natural’ world in her paintings as a form of escape. The very act of adopting another cultural identity as an escape from one’s own reality remains a relatable idea for her.

Faiza has chosen to create a body of works against the backdrop of cultural cross-pollination. She has been inspired by the paintings of the Dutch Old Masters, from the Golden Age of painting such as Melchoir de Hondecoter, whose works represented exotic birds. The Dutch traded with far off cultures, such as India and China, and brought back knowledge, information and materials that extended their own understanding of the world. The peacock repeatedly appears in de Hondecoter’s work with the composition interlaced with Christian messages of morality. In Faiza’s painting ‘Super Natural’ she has created a fantasy menagerie; a natural space, where exotic birds co-exist in utopian harmony. There is an absence of humans, but their presence is felt in the form of rubbish and debris, littered amongst the creatures. Concerns about human tainting of the natural world are expressed in this work.

Faiza’s new works are also inspired by the artists Franz Snyder, James A Whistler and George Hedrick Breitner. These artists’ images also reflect a time and a world that had immense curiosity and interest in new cultures and ideas. “I am particularly drawn to images of Western women dressed in kimonos and surrounded by blue and white china.” This solo show will also include three ceramic works, inspired by the Chinese and Japanese traditions. The lust for collecting fine far eastern China has created extensive pools of collections in the west throughout the history and not only contributed to western aesthetics and taste, but the very tradition of Dutch blue and white delftware, was influenced by Chinese porcelain, which itself bore the imprint of the country’s ancient trade with the Arab world.

Like Whistler, Faiza remains a diasporic artist and her journey has been enriched with travel, displacement, and her quest to understand The Other. The remaining body of works portrays her children (a subject she knows best). They inhabit various interior settings in her house, in romantic compositions inspired by ‘chinoiserie’. The paintings are composed in a 19th century fashion, but they are juxtaposed with modern day technologies like a wifi portal, remote controls, and mobile phones.

In one of her works, Faiza’s daughter, in her kimono, gazes romantically into the distance. Yet, she has her mobile phone in her hand that deeply roots the painting to our age. 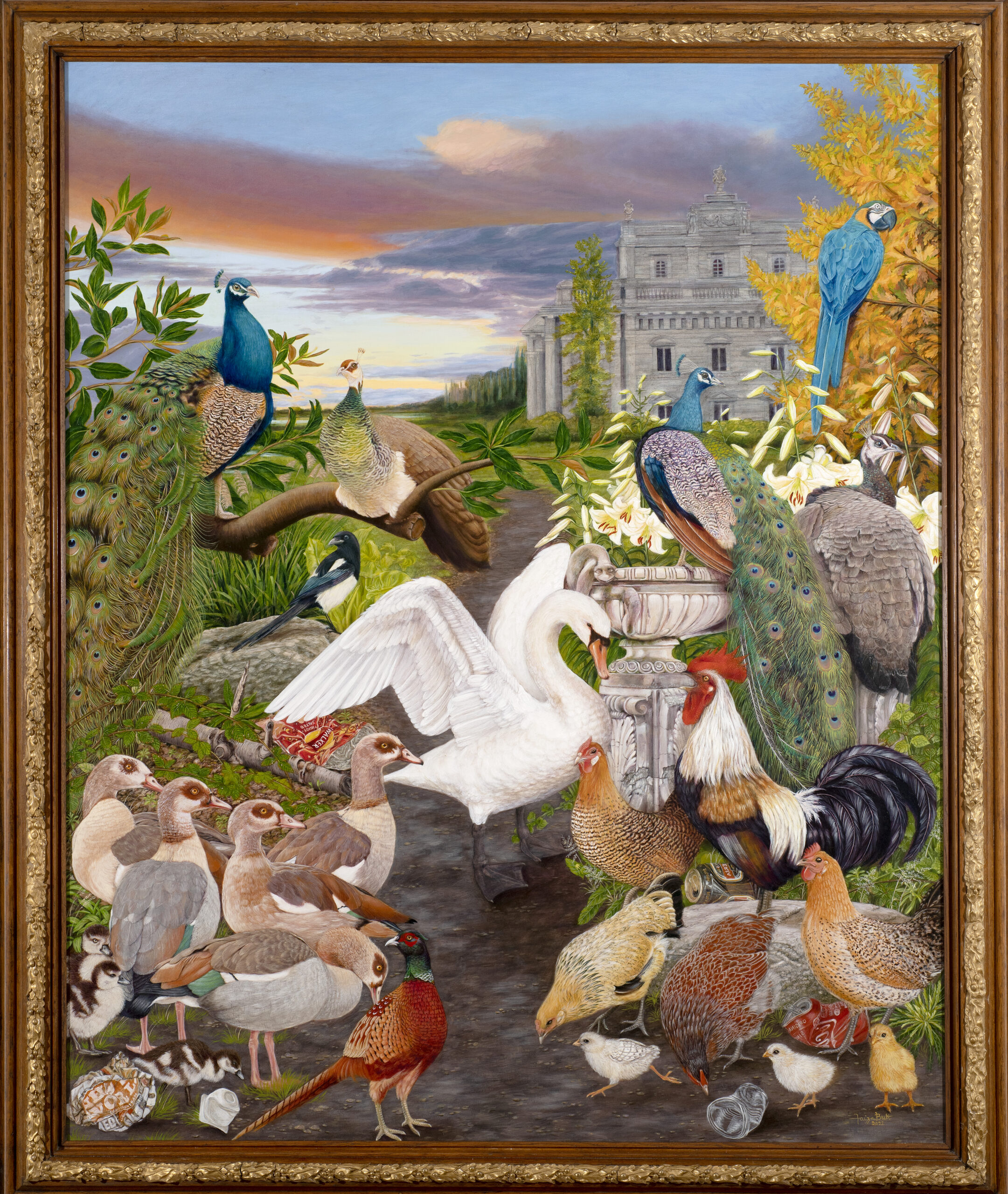 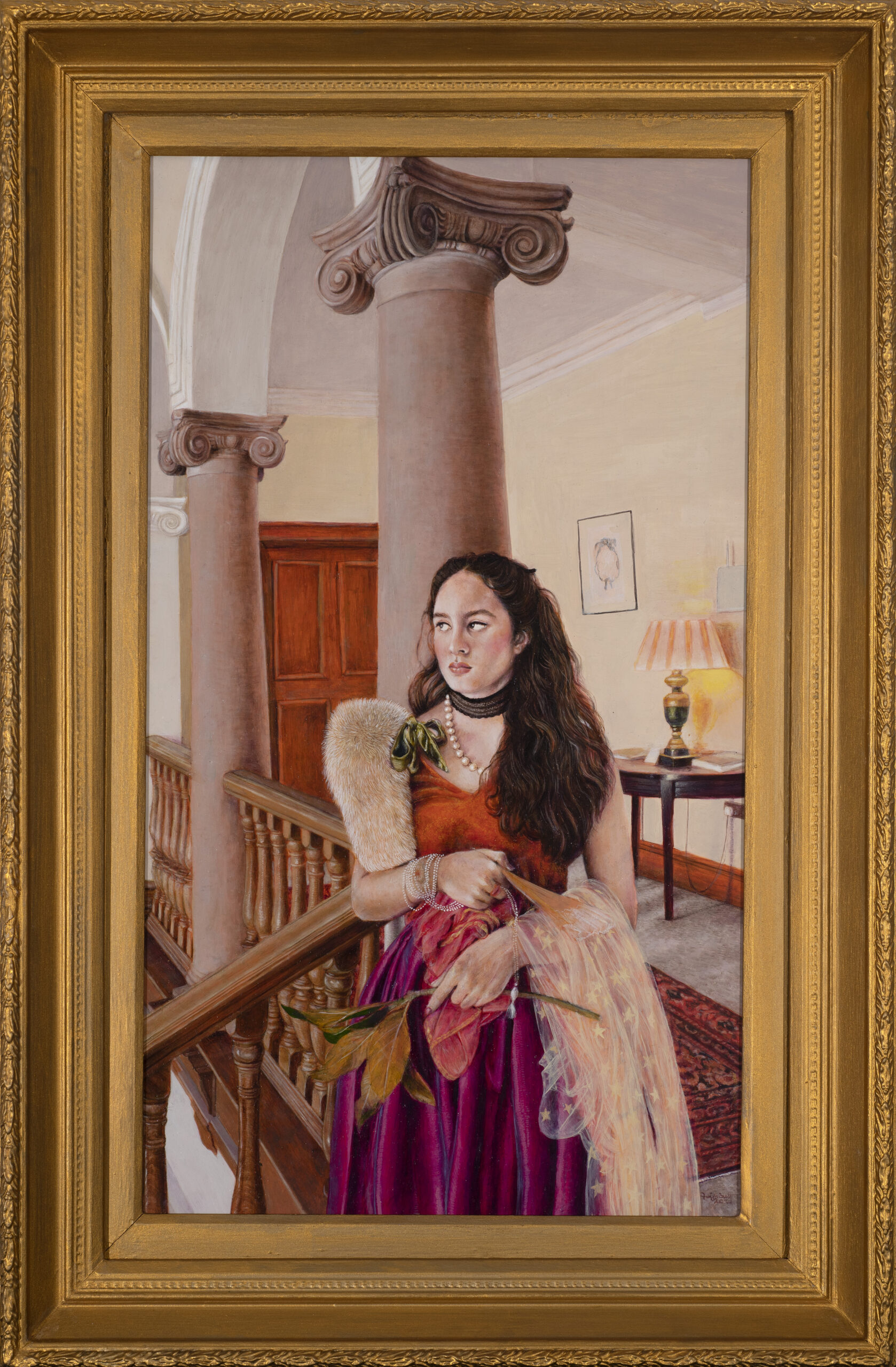 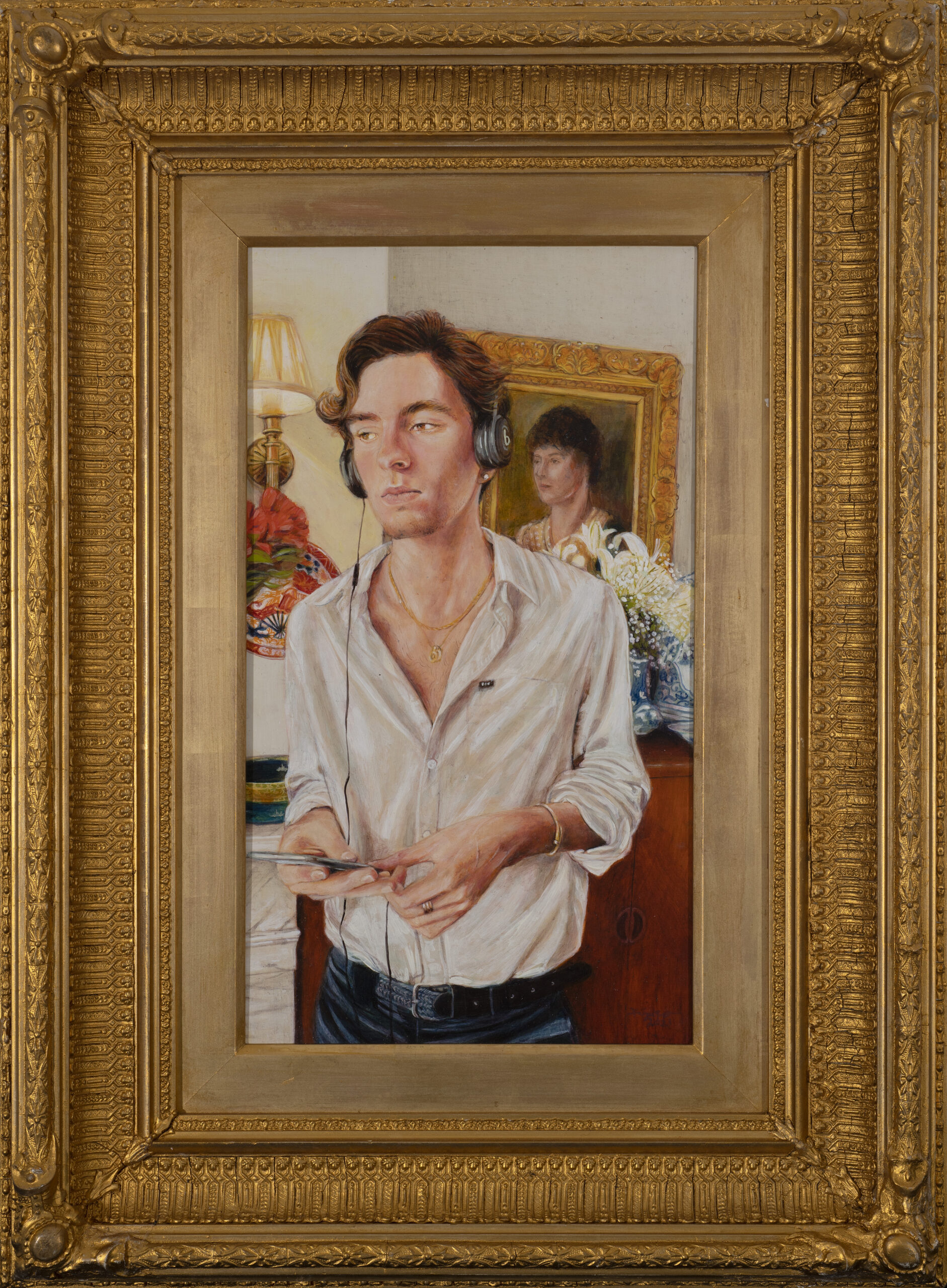 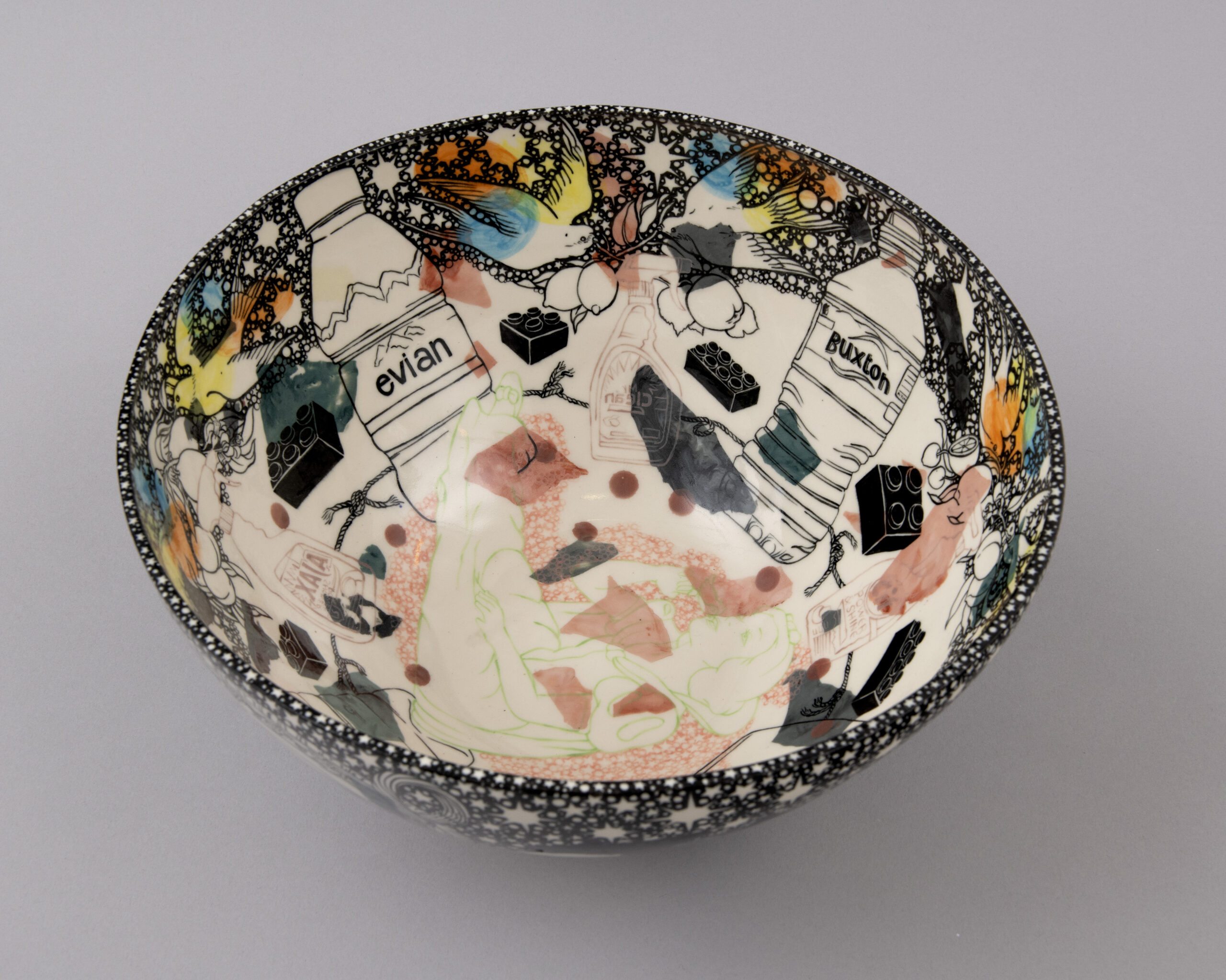 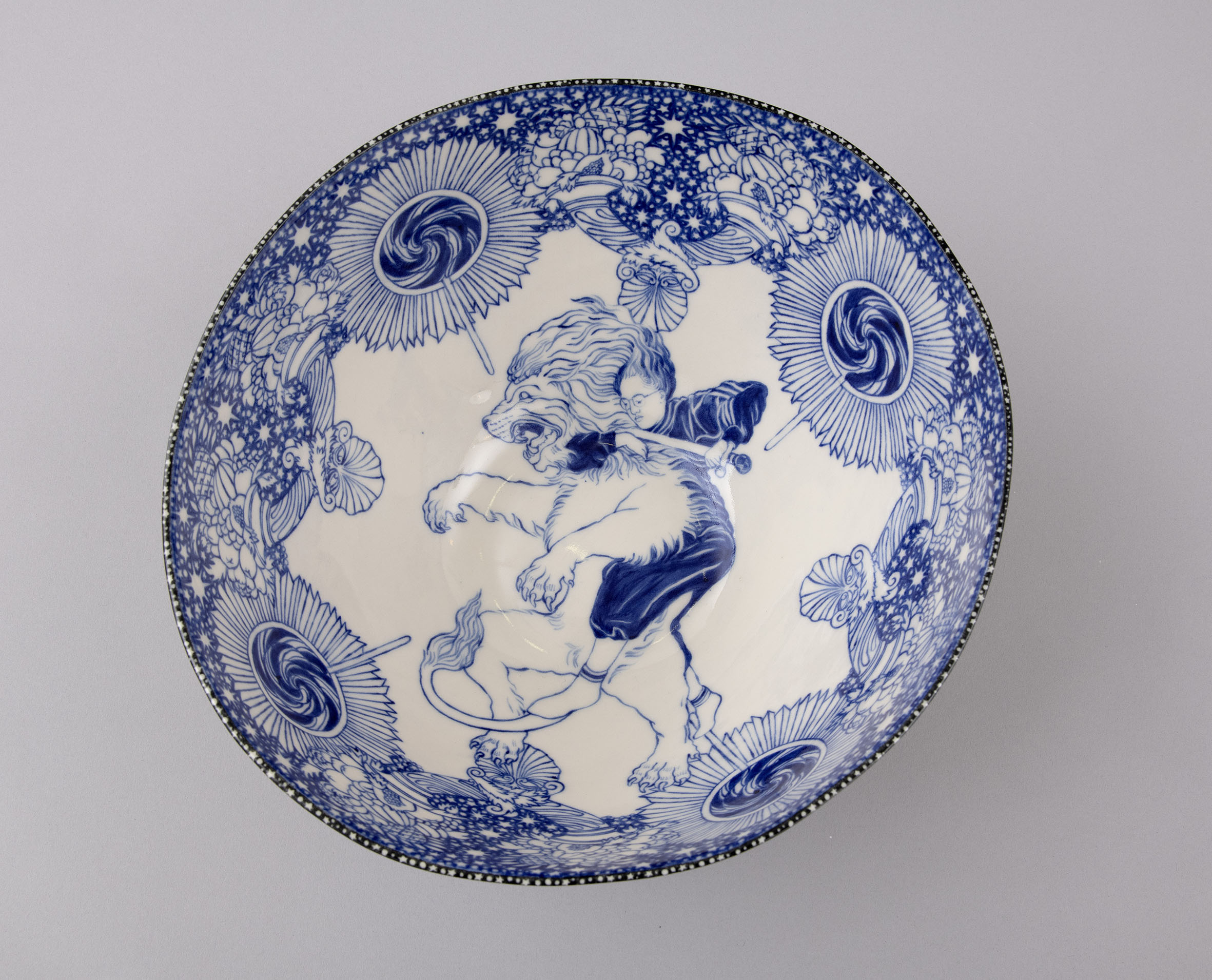