Grosvenor Gallery was first established by the American sociologist and writer Eric Estorick (1913-1993) who began to collect works of art when he came to live in England after the Second World War. Estorick moved to England in 1947 after his marriage to Salome Dessau. In the initial years, the couple developed a major collection of Italian art, which at one time was considered the most important collection of Italian art outside Italy. It was then that Estorick became a full time art dealer and went on to establish the Grosvenor Gallery in 1960, with its first premise on Davies Street. It was the largest and best equipped gallery in England at the time. The old Grosvenor Gallery that specialized in the Pre-Raphaelites had closed in 1906. Grosvenor Gallery went on to exhibit some of the major European artists of the time – some for the first time in London such as Magritte, Picasso, Sironi, Chagall, Lissitzky and Archipenko. Grosvenor Gallery also represented an impressive group of young artists such as Michael Ayrton, Jack Smith, Prunella Clough, John Hoskin and Karl Weschke. Estorick also added the already well-known artists Francis Newton Souza and Paul Feiler. Apart from Western European art, the Gallery was the principal outlet in the West for modern art from Eastern Europe. It also sold works by living Soviet artists, which was a major accomplishment for a Western gallery. Furthermore Estorick championed several South African artists notably Irma Stern, Feni Dumile and Sydney Kumalo. In 2006, Grosvenor Gallery collaborated with Vadehra Art Gallery in New Delhi to form Grosvenor Vadehra. The purpose of this collaboration was to promote international art in India and Indian art in the UK. In this guise it has held international exhibitions in India including a Pablo Picasso exhibition in 2006 and a highly acclaimed exhibition of Lucien Freud and Francis Bacon along with Tyeb Mehta and Francis Newton Souza in 2007. The artist Francis Newton Souza has been a focus for the gallery, his first show being The Human and the Divine Predicament (1964), followed by Black Art and Other Paintings (1966) followed by shows in 1998, 2001, 2002, 2005 at the Tate Britain in London and 2 shows in New York in 2005 and 2008. Since then the Gallery has continued to exhibit modern and contemporary South Asian art, predominantly the work of mid-20th century Indian modernists such as the Bombay Progressives, as well as Chughtai, Gulgee and Sadequain from Pakistan. Our contemporary program includes exhibitions of work by Rasheed Araeen, Faiza Butt, Olivia Fraser and Dhruva Mistry amongst others. Going forward Grosvenor Gallery will continue to focus on showing the best modern and contemporary Art from South Asia from our new premises at 35 Bury Street, where we will be situated from February 2017.

26th April – 8th May From 26th April – 8th May we will be exhibiting prints from the 1970s by one of Iran’s most important and revered modernists, Parviz Tanavoli (b.1937). Although known internationally for his sculptural work, Tanavoli produced a series of screenprints in 1974 which he then had woven as carpets using traditional methods. The exhibition consists of a number of these original screenprints, as well as some later editions. “Though Parviz Tanavoli is known as the father of modern Iranian sculpture, over the course of his seven decades as an artist he has created a diverse range of artworks from ceramics to rugs, from painting to prints. Through the years, Tanavoli’s art has been deeply influenced by his work as a teacher, a researcher, and a collector. And it is in his prints from the 1970s that one can clearly see the themes and motifs that would become central to his creative expression. Recalling his early works, Tanavoli said, “Iranian themes had come to possess the very fiber of my being and haunted my thoughts.” Dr. Shiva Balaghi, 2021 A publication is available to purchase, containing an essay by Dr Shiva Balaghi and a Q&A with the Artist on the origins of the series.

To view the works in person it is advisable to contact the gallery in advance. 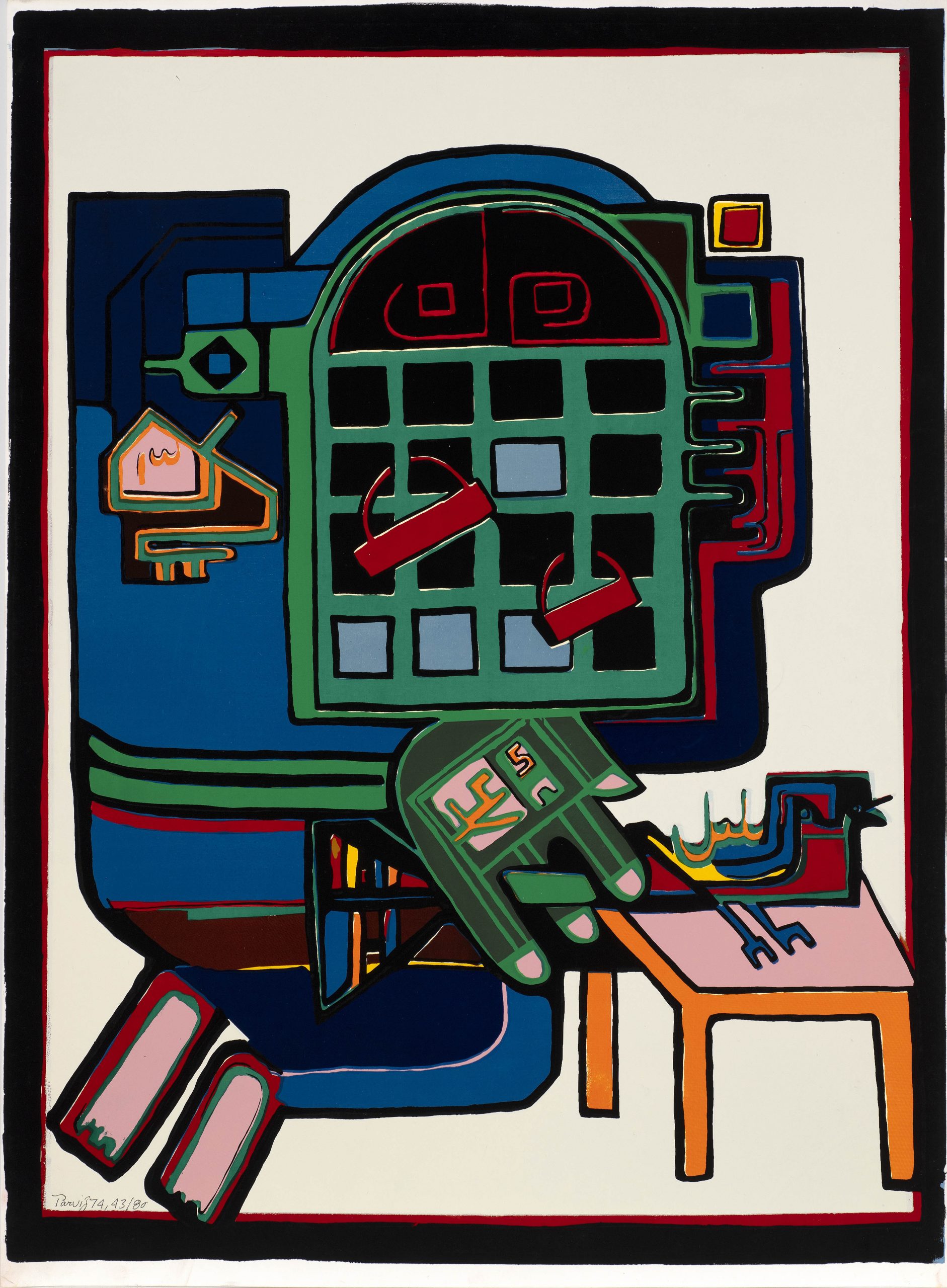 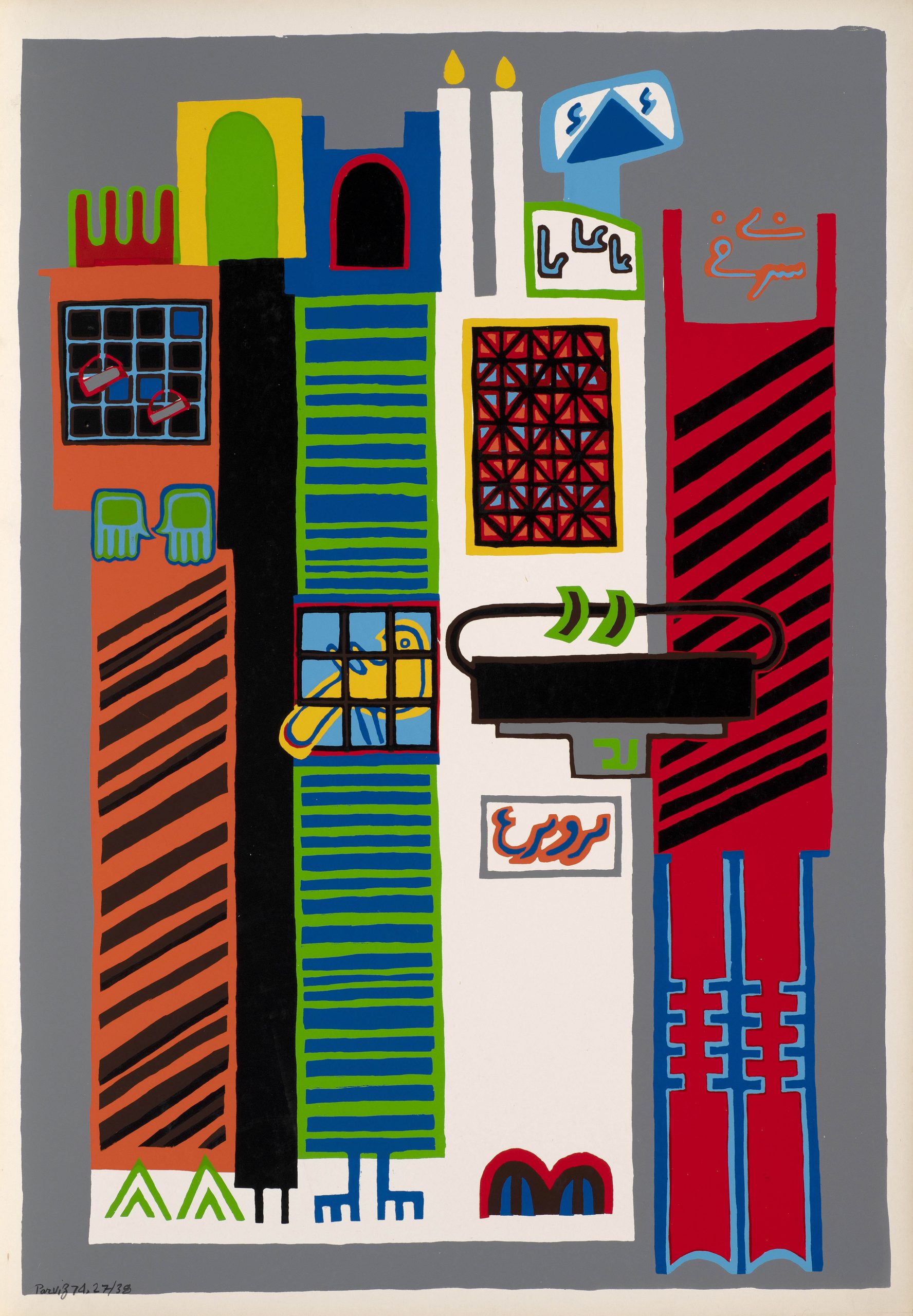 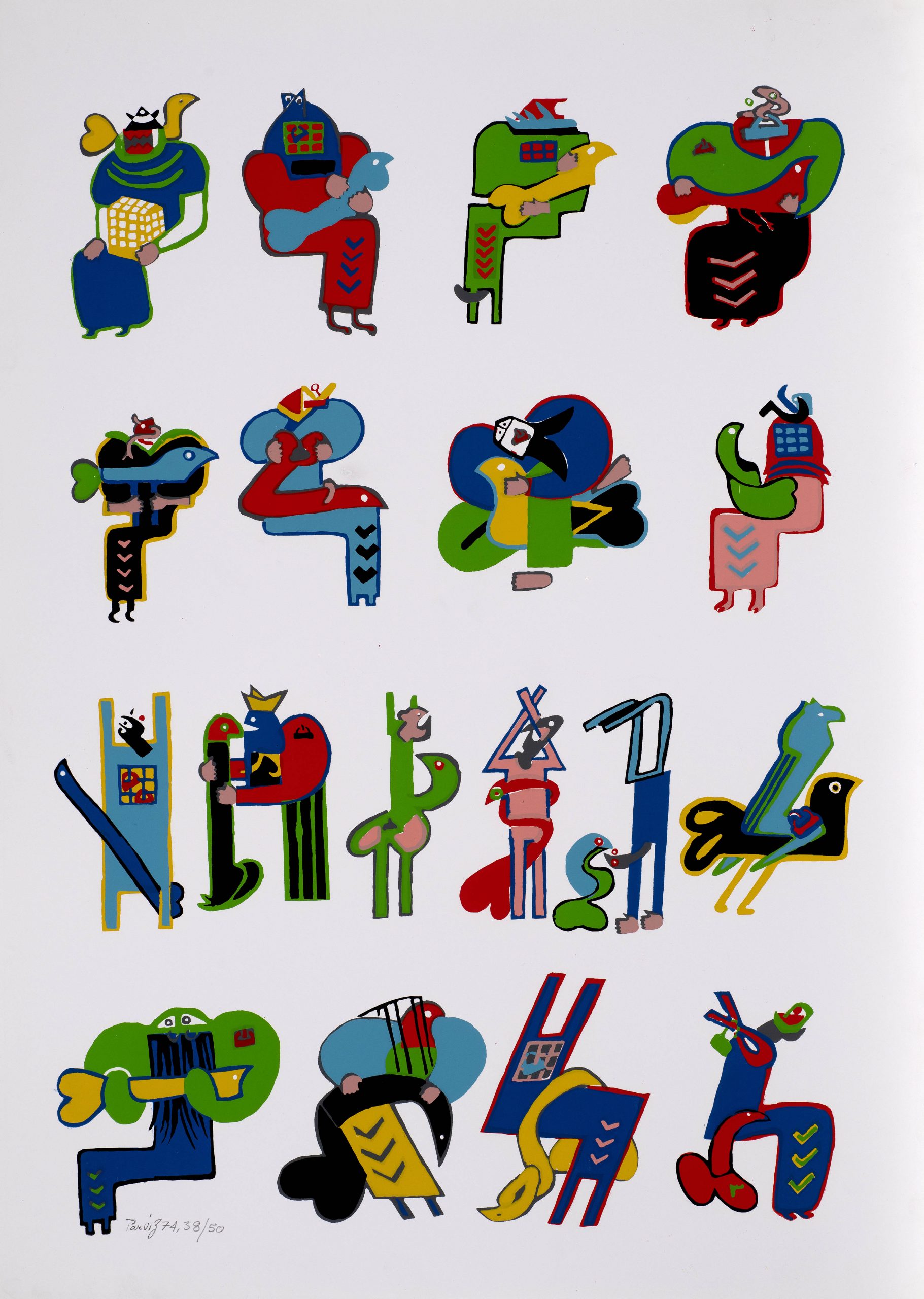 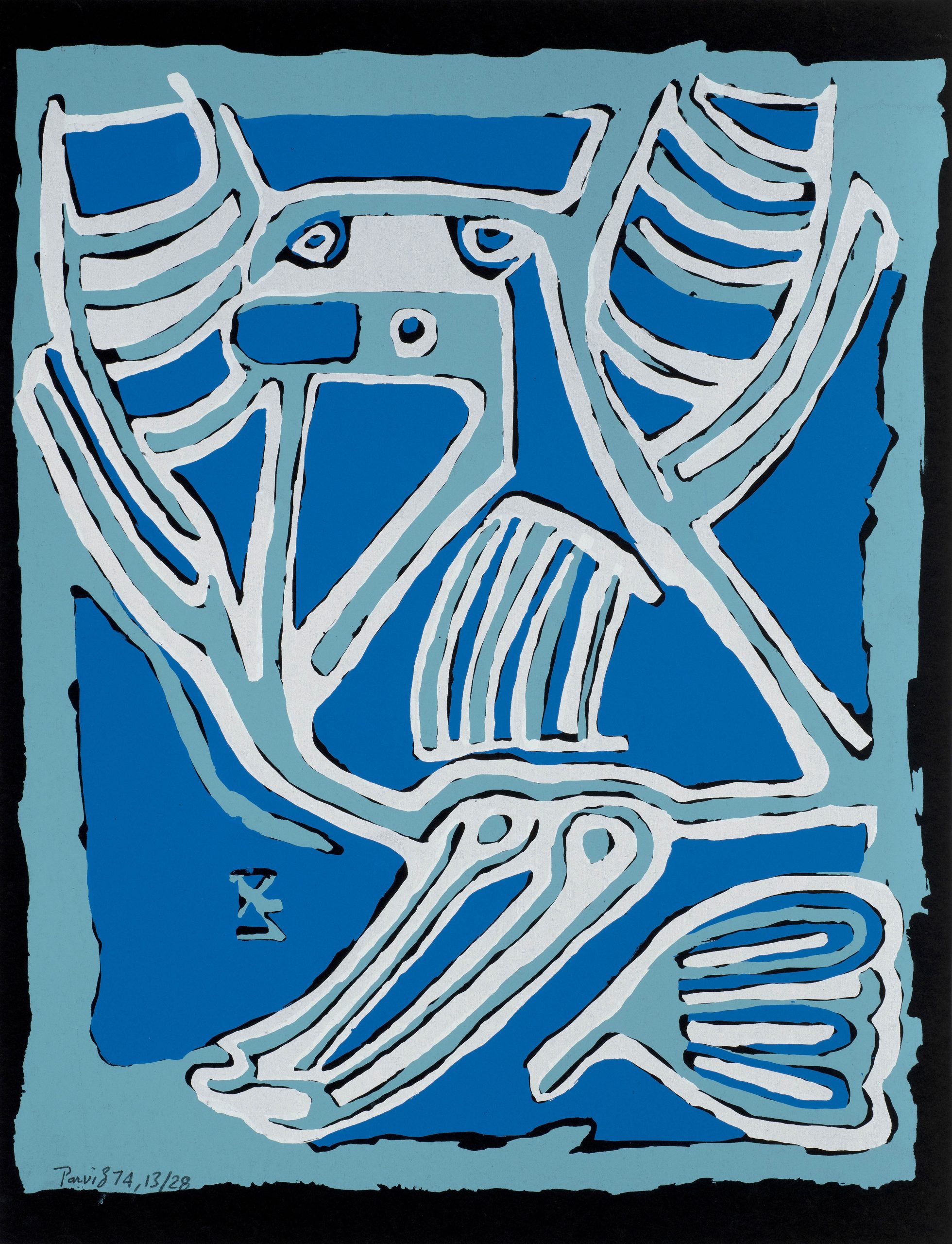 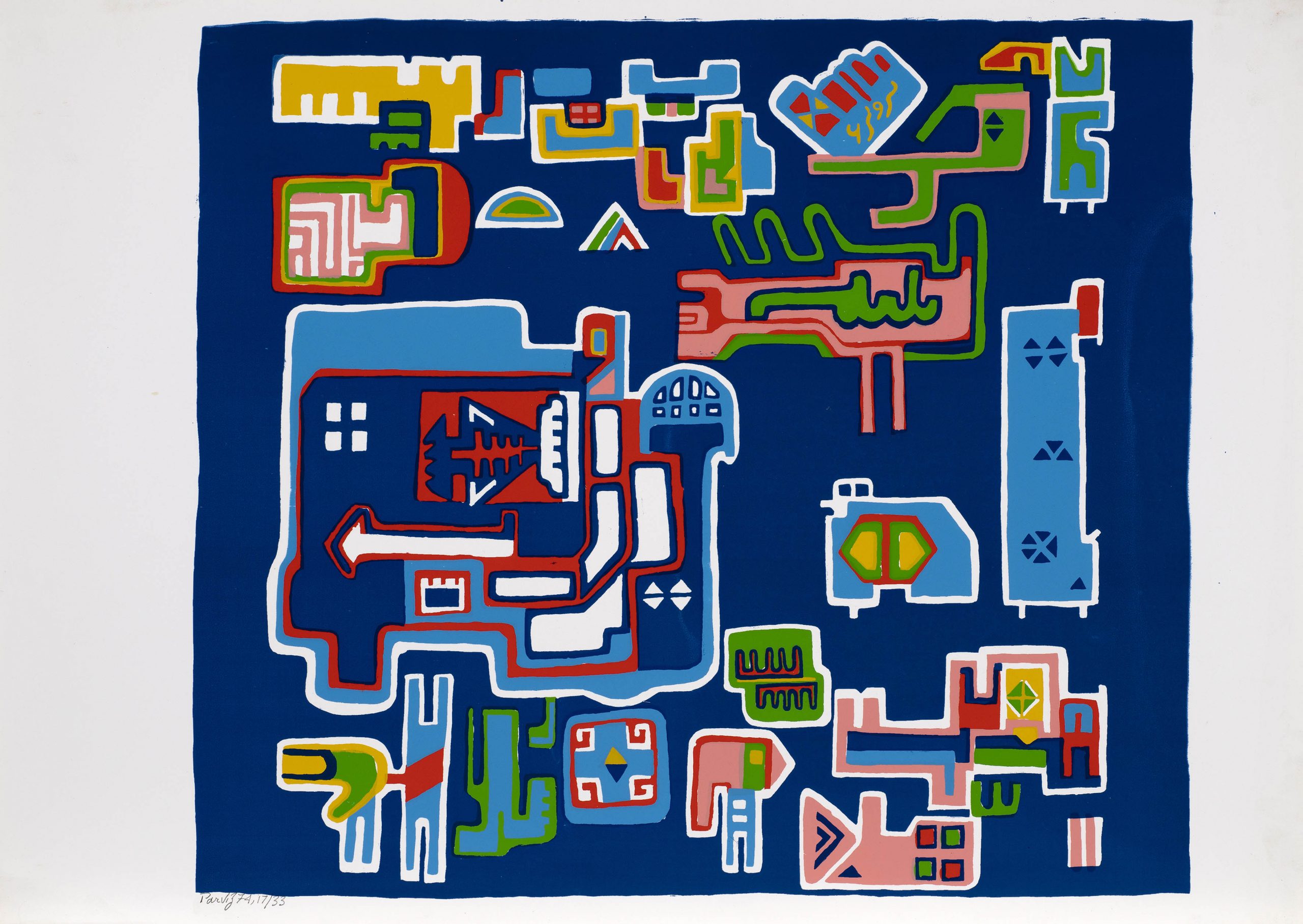