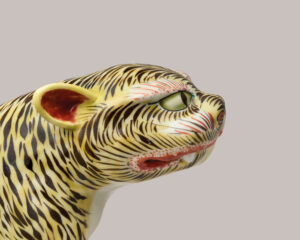 Jorge Welsh Works of Art 2022 exhibition Okimono: Japanese Porcelain Figures from the Edo Period, is dedicated to the theme of Japanese porcelain in the form of human and animal figures, mostly produced for the export market during the second half of the 17th and 18th centuries. The animals represented are usually found amongst Japanese iconography, whilst the human figures are inspired by Japanese cosmopolitan society, deities and legendary local heroes. The nature of the trade for Japanese porcelain has determined the rarity of these pieces, which, combined with their decorative, formal beauty, as well as their quality, made them highly appreciated in Europe, and may also have appealed to the Japanese domestic market.

This exhibition presents over 80 individual pieces, of which 75 are illustrated and discussed in the catalogue, along with an introductory article by Professor Christiaan Jörg. Through extensive documentation and supporting images, he analyses various aspects related to the theme of Japanese porcelain figures, including the origin and presence of these pieces in the most relevant European collections from the second half of the 17th century.